The Star Wars version of Angry Birds for your PC

Advertisement
A long time ago in galaxy far, far away... a group of rebel birds face a galactic threat again: the malicious empire of the pig soldiers.

The successful smartphone game launches a demo of their Star Wars version transferred to PC. Have fun in an epic adventure with Angry Birds in the legendary universe of Star Wars. Destroy the pigs until you get to the fearsome Darth Vader using the Force or the laser sword.

As in its mobile version, in Angry Birds Star Wars there are various worlds: Tatooine, the DeathStar, Hoth and an extra world of R2-d2 y C-3PO with secret levels to unlock. The fifth world, the Jedi, will only be available for the complete version, but you will be able to play up to 80 different addictive levels.

Its gameplay, the graphics and the sound present a great quality and fluidity that will introduce you totally in the game. Furthermore, each bird has its personalized ability: from a Skywalker that takes out his laser sword or a very fast Han Solo to an Obi wan using the Force.

If you are already an Angry Bird fan, now you can play more comfortably from your PC. And may the birds be with you.
Reviewed by Nelson de Benito Translated by Isa Harberer
Advertisement 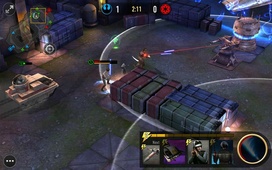 May 4th, 2018 All the free Star Wars games available for Android

May 4th, 2016 All the free to play Star Wars games on Android
Advertisement

Zuma Deluxe
Don't let the balls arrive to the center!
Plants Vs Zombies
Defend your home of the Zombie attack
Angry Birds
The most famous iPhone game arrives in Windows
City Racing
Race in illegal racings in big cities with corrupted cops
Angry Birds Rio
The most famous birds get to know Rio
Subway Surfers (GameLoop)
Play this thrilling endless runner on PC too
Super Smash Bros Crusade
Goku, Sonic, Mario and MegaMan get ready for the last fight
Prince of Persia
Repair the damage caused by an ancient curse

Summertime Saga
A fun and spicy adventure
IMVU
It arrives the revolution of instant messaging
Dolphin - Wii Emulator
Play Wii games on PC. Gamecube too
Goose Goose Duck
That goose is a little sus
Ryujinx
A Nintendo Switch emulator with excellent compatibility
OpenTTD
Plan the best transport system in the country
Second Life
Create your second character and start a new life
Playnite
Merge your game libraries and platforms into a single tool